School choice has long been on the minds of the Republican Party and wanting to give parents the power to decide what’s best educationally for their children has been their goal. Many states have either passed or have introduced legislation to shift the power to the parents. So, when Corey A. DeAngelis, Director of Research at the American Federation for Children, tweeted out to Alabama Senator Tom Butler, a Republican, asking him if he supports funding students instead of systems, given that Butler has received $25,000 from the Alabama teacher’s union over the past couple of months, Butler responded in kind – he blocked DeAngelis.

The Republican Party has made no bones about wanting to give parents complete control over how their state taxes are used when it comes to school choice, their children, and what they feel works best. 25 states have introduced school choice legislation. To date, four states have passed legislation while one state, Michigan, had the legislation vetoed by their Governor Gretchen Whitmer. Advocates are going door-to-door getting enough signatures to overturn her veto.

So, the question that DeAngelis posed to Sen. Butler seems fair enough. If he has been taking political contributions from the Alabama teacher’s union, just where does he stand on school choice? Is blocking DeAngelis the veiled answer?

It’s no secret, nor should it be, that teachers’ unions contribute to political careers. Before Sen. Butler became a Republican Senator, he was a full-fledged member of the Democratic Party for years. Since 1982, when Butler first jump into the political arena, up until 2010, Butler wore the Democratic hat. But as you can see in the image below, Butler was taking contributions from the Alabama Education Association (Alabama teacher’s union) even as a Democrat.

Looking back over the past few years, it’s not like Sen. Butler hasn’t been involved with controversial items, much like school choice or affiliating himself with the Alabama teacher’s union. In 2019, Butler voted to make abortion a crime at any stage of pregnancy. This vote meant even in cases of rape or incest; abortion was a crime.

Again in 2019, Butler voted for a gas tax increase. This increase, which was voted in, was a 10-cent bump that would occur over a three-year timespan. Alabama’s 18 cents per gallon tax rate jumped 55% to 28 cents per gallon.

Finally, in 2020, Butler voted against legalizing medical marijuana. This was another unpopular vote on his resume. Thankfully for many, the Alabama Senate voted for the bill despite Butler’s opposition.

You can’t say that school choice is any more or less important than the above bills, but it definitely is on the minds of Alabama parents as well as those across the country. the Alabama teacher’s union has some skin in the game too. The COVIC pandemic has and continues to, wreak havoc on our children with the shutdowns, mask mandates, and remote learning. To many, taking money from the teachers’ union is in direct opposition to what the Republican Party is fighting for.

The Alabama Education Association teacher’s union is the largest in the state and like many teachers’ unions, they hold an unhealthy amount of power. As seen, they are very big on the political front and don’t appear to be changing that stance any time soon. In 2018 alone, they dumped $604,500 into Republican campaigns. Hard to imagine since Republicans now appear to be leaning heavily toward school choice, something teachers’ unions are not keen on.

So far, Butler has not responded to DeAngelis’ questioning. We know where the Alabama teacher’s union stands on the matter. Maybe we’ll find out soon where Sen. Butler stands as well. 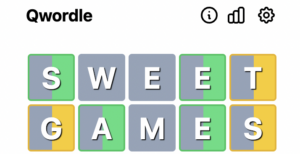 Qwordle – The Wordle Game For The Multiverse

Qwordle is the new Wordle-like game that has many of the same rules but adds a bit of quantum physics into the mix as well.

The post Qwordle – The Wordle Game For The Multiverse appeared first on Tell Me Best.

Let's dive into everything we know about Suri Cruise, the daughter of Tom Cruise and Katie Holmes. How is her relationship with her parents?