One school's tragedy turned into a heartwarming story with a group of dads on duty.

They call themselves “Dads on Duty” and it is a program that has turned into a big hit at Rigby Middle School. The program, which employs at least 10 volunteer dads, has brought a much-needed smile and sense of relief to the middle school that, like the entire globe, has been dealing with the ongoing COVID pandemic. But for this middle school, the COVID pandemic only tells a small part of their story.

The Dads on Duty volunteers are quite noticeable around the middle school campus as they are seen wearing their black Dads on Duty t-shirts along with their black baseball caps. They offer smiles, hugs, conversation, an ear, whatever they can to connect with the kids and be positive male role models. Dads on Duty has made a significant impact on a school slowly recovering.

Rigby Middle School and this version of Dads on Duty is located in Jefferson County in the small town of Rigby, Idaho. It is also a school beset with tragedy. Last summer, before Dads on Duty was born, tragedy struck in the form of a sixth-grade female student who brought a gun to the school and began shooting. The incident resulted in two students being shot along with one custodian. All injuries were non-life-threatening and while the incident gained national attention for the shooting, it also gained attention for how the young girl was disarmed – by a hug.

Teacher Krista Gneiting was preparing her students for their final exam when she heard the very first gunshot. She went to the door and looking out, saw the custodian, and dad, lying on the ground. She then heard two more shots and immediately closed the door. “So I just told my students, ‘We are going to leave, we’re going to run to the high school, you’re going to run hard, you’re not going to look back, and now is the time to get up and go,’” Gneiting said via The Guardian from a Good Morning America interview.

After she got her students out to safety, Gneiting went to help one of the students who had been shot. She said it was then that she saw the young girl holding the gun. She knew right then she had to get the gun. As she approached the young girl, she asked her if she was the shooter.

“I just slowly pulled the gun out of her hand, and she allowed me to. She didn’t give it to me, but she didn’t fight,” Gneiting said. “And then after I got the gun, I just pulled her into a hug because I thought, this little girl has a mom somewhere that doesn’t realize she’s having a breakdown and she’s hurting people.”

Five months after this incident, police returned to Rigby Middle School and arrested another young student who had brought a gun to school. Thankfully, tragedy was avoided as no shots were fired. Dads on Duty became a necessity.

These incidents, along with the troubles many students were having with first the school closures and then returning to in-person learning, brought to the forefront students’ well-being and mental health concerns. It was then that Bigby school safety coordinator Whitney Wagoner decided to get Dads on Duty rolling. Wagoner had heard of the successful Dads on Duty effort in Southwood High School in Shreveport, Louisiana, and thought it’d be a perfect fit for Bigby Middle School. Bigby principal Richard Howard loved the idea, claiming it was a no-brainer. After talking to the school district, they sent out an email to all parents asking for dads to sign-up as volunteers.

To become a volunteer for Dads on Duty at the middle school, dads first need to undergo a background check. Once they pass that, they get their t-shirt and add their name to the calendar. For now, Dads on Duty walk the school grounds during lunchtimes on Tuesdays and Wednesdays.

Wagoner made sure to stress that Dads on Duty is not a security program. Their sole purpose is to offer support and become a role model for the kids at the middle school. Some students, though, say they feel much better when Dads on Duty are patrolling the grounds.

The volunteer dads receive no formal training to walk the halls. The only requirement for dads is simply to be friends with the kids. Monica Pauley, the school district spokesperson, said the program features dads to take the pressure off moms who participate in other school-related programs such as the PTA or other roles within the district. They center the schedule on lunchtime hours to better work with local dads’ work calendars. 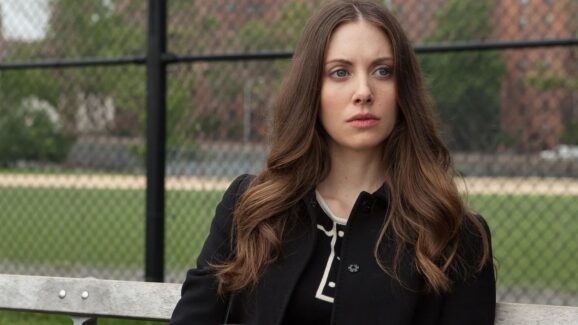 Alison Brie Is Amazing In A Sexy Metal Mini-Dress

Alison Brie wore a stunning metal dress for her recent appearance on the Kelly Clarkson Show and decided to show it off on social media.

This is a great program that hopefully gains more traction across the nation. As many kids continue their struggle coming back to school from the COVID pandemic, seeing Dads on Duty could be the perfect recipe. How can anyone turn down an authentic smile and a hug?

Florida Teachers Respond To New Rule Allowing Vets To Teach Without Degree
Schools Might Get More Time To Spend COVID Relief Funds, With One Condition
Harvard Speaker Draws Criticism For Chinese Rhetoric
This State Is Short More Than 9,000 Teachers